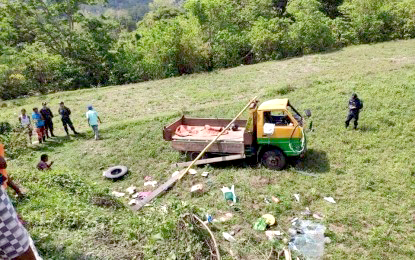 BAGUIO CITY— At least seven people died while 15 others were injured after a dump truck they were riding fell off a ravine in Tabuk City, Kalinga, police said on Saturday.

Lacuata said the victims, all residents of New Tanglag, Tabuk City, Kalinga, were on board a dump truck going to Barangay Balaway when it experienced a mechanical problem and fell off a five-meter ravine at Sitio Binongsay, Malin-awa, Tabuk City, Kalinga at around 10 a.m.

“According to the investigation, victims were heading to Barangay Balawag to attend a Kalinga customary practice. Upon reaching the ascending portion of the road, the driver failed to shift to lower gear,” Lacuata said.

The victims were supposed to attend a ritual called “pusipos”, a tradition wherein relatives visit and enliven a sick elder.