Every July for 3 years now, President Rodrigo Duterte drags us down a cesspool of rambling profanity, lasciviousness, and threats that, aided by film directors and creative camera angles, has been passed off as the State of the Nation Address (SONA).

It is easy to say that his speechwriters lack the imagination to draft political thought prose that would merit the use of a compound sentence, but Duterte has always gone off script. He can only manage to read a few lines from prepared text before going into terrain that is familiar to him: vulgarity, brutality, inanity, and duplicity masquerading as governance.

Of course, one can argue that Duterte always disintegrates into a verbal septic tank, spewing absurdities at geyser levels, whenever he makes a speech, but translating this into a State of the Nation Address makes the tirade into an official report card of the administration’s “achievements.” This is the official platform which is supposed to serve as the administration’s report of its accomplishments, justification that it is upholding its social contract with the citizens, and a roadmap to tell us where it is we’re headed. But his 4 SONAs have been issued through a standard 3-trope template:

Drugs: The cause of all our problems and are to blame for destroying our country, our children, and everything that we hold dear.

Threats: Direct threats like bombing lumad schools or indirect ones like encouraging you to slap a government official who is asking for a bribe, are hung over our heads like a punishment for not following Duterte’s Law. The threats are a jumble of words that go something like: “Do what I say or I swear to God and my mother’s grave, I will kill all of you mother fuckers.” It kind of sounds like what my father used to say when I was a kid: “Do it or else…”

Comic relief: A sexually-loaded “joke” targeted at women to make people laugh but effectively reduce women to caricatures. The ambitious bitch who was too smart and had it coming, the whore, the slut waiting under the Boracay sun for a foreign gentleman to come and visit. (Although based on the transcripts, it is unclear if Duterte was actually referring to foreign female tourists lounging under the sun. It is difficult to decipher, but Duterte has always had a penchant for foreign women. Case in point: his rape “joke” about the Australian nun.)
But most disturbing is how this trifecta template is met with applause and laughter even after 3 years of Filipinos hearing the same thing. Sycophants and minions were only too eager to do the President’s bidding, clapping their hands and wagging their tails, overshadowing the protestors on the streets just outside the congressional hall. Some legislators were seen on camera snoozing through parts of the 93-minute verbal meandering. It is another indication that they don’t take him seriously. Maybe they know that they just have to sit through this to get their program budgets – much like that drunken old uncle at Christmas that you detested but endured as a child because he would always give you a present anyway.
In our homes, in our offices, or on jampacked trains or in a van – wherever we are watching the SONA – we look away, we keep our head down, change the channel, or swipe up. Some may applaud or chuckle. Our silence, our indifference, is our version of acceptance, of approval.
This is how we make the unacceptable acceptable, even laughable and worthy of applause. What else can we do, we tell ourselves? Isn’t it better that we can just go about our business working or whatever it is that we do in our own way to make life a little easier for ourselves and our families? It is easy to question the point of outrage when trolls and bots are already at the firing line ready to echo the administration’s message and question, shoot down, and vilify anyone on social media who dares to express a different opinion.
Meanwhile, our sense of what is wrong and what is right are reset, recalibrated according to a standard that we had once considered abhorrent. Our norms and decency disappear into a dark place, safe from the scorn of others and the tugging of our conscience.
“Three more years to go,” many have said, between gritted teeth.
Is that the way to cope with this madness? Or should we look at what has happened in just 3 years?
The blood of more than 27,000 has been shed in the name of cracking down on illegal drugs, the youngest victim being 3-year-old Mica, who ran into her father’s arms during another drug bust that “went bad.”
Close to a hundred have been killed in violence sweeping the Visayas in central Philippines.
Violent extremism is positioning itself as an option, as a form of resistance, as Marawi remains in ruins and thousands still live in tents two years after the military took back control of the city.
Our fishermen cannot fish in our waters without fearing that a Chinese vessel will ram and sink their boat and leave them to drown in the open sea.
Ousting a chief justice of the Supreme Court is faster than getting an annulment.
The Vice President and others have been charged with sedition.

Simultaneously, a former police chief and architect of the war on drugs is an elected senator set to conduct an “independent” investigation into drug operations, extinguishing any hope of justice for those killed.
A dictator we fought against is buried among heroes who fought for our freedom; his children and grandchildren are back in power, pulling the strings of government to work in their favor.
The ramifications of these will outlast the next 3 years. Our institutions are compromised and, along with it, our values as a people with a proud history of fighting against oppression and dictatorship have been reset to apathy and passive disagreement.
Looking away and bowing our head down until this is all over will not change any of that.
But I do agree with Duterte when he said that we were entering a period of consequences and said: “I have met the enemy face-to-face and, sadly, the enemy is ‘us.’ We are our own tormentors…we are our own demons, we are as rapacious predators preying on the helpless, the weak, and the voiceless.”
If the SONA serves as a roadmap of what we have done and where we are headed, when all of this is supposed to be over, will we still recognize the enemy when the enemy is us? – Rappler.com 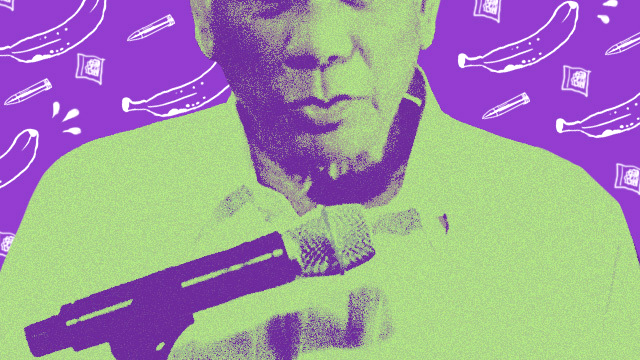