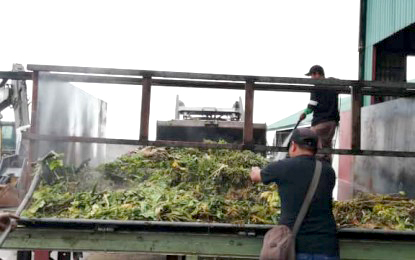 BIODEGRADABLE WASTES. A worker at the city’s Environment Recycling System situated at the former Irisan dumpsite applies a ‘deodorizer’ to the biodegradable wastes from the city market for conversion to compost fertilizer. The city will soon require all households and establishments to compost their own biodegradable wastes as required under the ecological solid waste management law. (PNA photo by Liza T. Agoot)

BAGUIO CITY – The city government will soon require all households and establishments to have their own composting areas for biodegradable wastes, an official said on Wednesday.

Eugene Buyucan, city General Services Office (GSO) head, said anybody can compost their biodegradable wastes due to its simple procedure and requires only a minimal space even in houses without backyards.

“Makakagawa na tayo ng compost fertilizer pero dapat ang residente mismo mag-adopt pa rin ng waste management, mag compost ng nabubulok na basura (While we are capable of making compost fertilizer from biodegradable wastes, this is not our goal, we are still encouraging residents to manage their wastes and have their own compost),” said Buyucan, whose office handles the garbage issues of Baguio.

If residents and establishments adopt composting methods, he said the city government does not have to collect biodegradable wastes.

Buyucan said the city collects an average of 50 tons of biodegradable wastes, mostly collected from the city market, which are processed at the city’s environment recycling system (ERS) located at the former Irisan dumpsite. After processing, 12 tons of compost is produced.

The official said Republic Act 9003 or the ecological solid waste management act requires that residents manage their biodegradable wastes by having their own compost pits or bins.

Buyucan said backyard composting is the obligation of residents under the provisions of the law to help the concerned government agencies and local governments address the garbage disposal concerns in their areas of jurisdiction.

He said residents can go into urban gardening in their homes using the compost soil they are able to produce.

“If everybody will do compost, we can have successful urban gardening where residents would be able to produce simple vegetables for their consumption,” he said.

He added that a simple composting method would only require any container where biodegradable wastes can be stored.

Cover the biodegradable wastes with a small amount of soil for drying and repeat the process, until filled. The compost can be used in one to two months for their backyard garden, he said.

Buyucan said they will coordinate with the departments of agriculture and environment and natural resources for technical training on composting in residential and commercial areas.

Earlier, Mayor Benjamin Magalong urged residents and business owners in the city to adopt their own backyard composting methods and technologies to lessen the city’s biodegradable waste production.

The mayor said it is high time to instill the practice of composting their biodegradable wastes.

In a meeting with the city’s department heads on August 7, the mayor urged departments concerned to prepare business owners along Session Road for the new composting requirement which the city will impose soon.

“Every business especially restaurants should have their own composting facility,” the mayor said, tasking the GSO to disseminate information on simple composting methods that can be done by businessmen.

At present, the city government faces a garbage disposal problem due to a large lot area that can be used as landfill. Other jurisdictions adjacent to Baguio have refused to accept the city’s proposal to make a landfill that will be used by the BLISTT (Baguio, La Trinidad, Itogon, Sablan, Tuba and Tublay).

Baguio currently hauls its residual wastes to the sanitary landfill in Urdaneta City, Pangasinan. As of 2018, the city government has spent over a billion pesos to manage and haul the garbage to the private landfill./Liza Agoot (PNA)