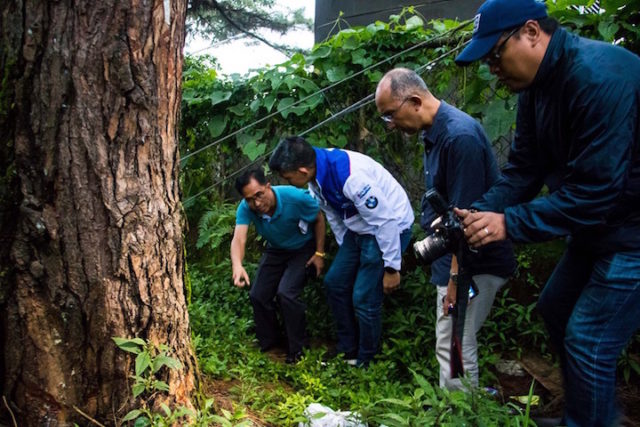 The Office of the Provincial Prosecutor in Benguet charged a corporation and its land developer of two counts of violation of environmental laws for allegedly poisoning 45 fully grown Benguet pine trees along Legarda Road last year.
In a joint resolution dated 27 January 2020, Assistant Provincial Prosecutor Sheryl Anne Paoad – Cabantac charged the officials of Gateluck Corporation and Greatzone Enterprises, “one count of violation of Section 18 of Republic Act 11038 or the Expanded National Integrated Protected Areas System (ENIPAS) Act of 2018 and another count of violation of Section 226 par. C No. 1 of City Ordinance 18 series of 2016 or the City Environmental Code.”
The issue stemmed from the complaint filed by Mayor Benjamin Magalong before the Office of the City Prosecutor in August last year against Gateluck Corporation for allegedly using “poisonous or toxic substance” to “intentionally kill” 45 pine trees on the corporation’s property.
Magalong claimed 45 counts of environmental violation to the City Environmental Code but was earlier dismissed by Deputy City Prosecutor Conrado Catral for lack of probable cause thus Magalong filed the Motion for Reconsideration before the Office of the Regional Prosecutor which was then endorsed to Paoad-Cabantac along with a separate motion filed by the Department of Environment and Natural Resources (DENR) for the same case.
In the joint resolution, Paoad-Cabantac set aside the opposition of respondent Jasper Golangco of Gateluck Corporation that the Motion for Reconsideration was filed out of time by mere difference in the address of the complainant. Paoad-Cabantac said the certification issued by the postal office at City Hall instead of the mayor’s residential address stating that the resolution was received by the Mayor’s Office on October 7, 2019 enjoys presumption of regularity and therefore can be acted upon its merits.
The prosecutor also stated that additional evidence may be submitted and can still be considered subject to their weight and sufficiency during the resolution of the Motion for Reconsideration.
Paoad-Cabantac established that TCT 018-201900216 covering the property where the pine trees were allegedly poisoned, is covered by ENIPAS specifically citing Section 5 of the said law.
“The certification issued by the CENRO is unequivocal and explicit that TCT No. 018-201900216 is located within the Marcos Highway Forest Reserve, a protected area and an initial component of the system. By being a protected area, human activity therein are hereby regulated by law. To be exact, protected areas shall be managed to enhance biological diversity and protected against destructive human exploitation…” the joint resolution stated.
In his original complaint, Magalong said boring by drilling holes on the tree trunks is an act to deliberately cause damage and death of pine trees which is in blatant violation of the city’s Environment Code.
This was sustained by the prosecutor in the joint resolution stating, “drilling holes into these pine trees and injecting poisonous substances are acts punishable under the ENIPAS Law and the Environmental Code of Baguio City.”
The joint resolution was endorsed back to the Regional Prosecutor Nonnatus Caesar Rojas for information and appropriate action./Jessa Mardy Samidan