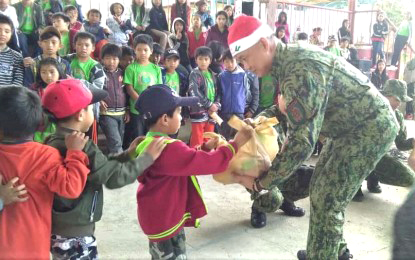 BUGUIAS, Benguet–The Benguet Provincial Police Office (BPPO) on Tuesday threw a Christmas party for over 200 pupils and their teachers at the Bot-oan Elementary School in Barangay Catlubong here.

At least 262 pupils from Kindergarten to Grade 7, including 10 teachers, received gifts from the BPPO during the annual Christmas gift-giving activity of the office. The goodie bags contained a lunch box, a tumbler, an umbrella, and a hygiene kit.

There were parlor games and prizes, dancing and singing which brought out the vocal chops of the children.

To make the children feel comfortable, a “boodle-fight” lunch was also prepared with everyone eating with their bare hands.

BPPO director, Col. Elmer Ragay said they go around the various towns every year as part of the outreach activity as part of the initiative to bring the people closer to the police.

“We conducted the program to show to the community that the police do not only look after the peace and order of a place and runs after the criminals. We also help look for ways to give joy and share a little, especially to the children,” Ragay told Philippine News Agency (PNA).

Ragay said during the 14th Adivay Festival and 119th Foundation day of Benguet, the BPPO conducted a fun shoot fundraising event that yielded some money.

The amount raised was used for the Christmas outreach here and at Jose F. Opiles Elementary School in Tinongdan, Itogon, Benguet last Dec. 3.

Teacher Rosela Bacasen said the activity is the first outreach program in their school.
She said the students are not the poorest in the municipality but they are grateful that their school was chosen by the BPPO for its activity.

“We are still grateful to the police not only because of the gift they shared to our students but also for visiting our place,” Bacasen said.

In an interview, Christopher Alabag, a village official at Catlubong who chairs the committee on education, said their village also requested for other outreach programs, hoping that other schools in their area will also have the same activity.

Ragay said the activity is not only about sharing the season with those in far-flung villages, but making them feel that there is the police whom they can call on for help.

“We want them to feel the presence of the police not only during times of calamities or when there are crimes that happen but also when they are happy and having fun playing,” he said. (PNA)