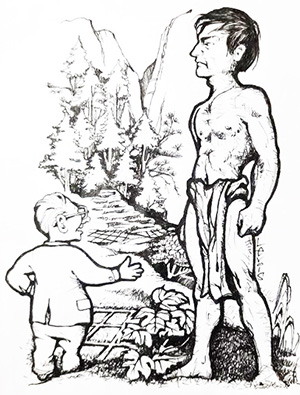 Photos of potatoes accordingly dumped along KM. 21, Ambassador, Tublay, Benguet has been circulating in social media particularly on Facebook as of August 3. This was after Mr. Chris Polig, owner of the Polig Farms, took photos of the dumped potatoes which is located near his farm.

One of the reasons that farmers were not able to bring their produce to the market immediately is due to the continuing monsoon rains that is affecting mobility given the rugged and fragile landscape of the region.

During the follow-up investigation conducted by  Addison Kyle B. La-ao of the Department of Agriculture-Cordillera’s (DA-CAR) Agribusiness and Marketing Assistance Division (AMAD), he found out that the 1.5 tons of potatoes were harvested last July 30, 2021 by a farmer from Sinacbat, Bakun, Benguet. Since the potatoes were wet, the farmer stocked them from Saturday until Monday hoping that these will dry up. However, the potatoes remained wet causing it to rot slowly.

Potatoes can be stocked for weeks when dry but are prone to rotting when kept wet and not allowed to air dry properly especially during the rainy season.

On the evening of Monday, August 2, the potatoes were transported to the Backfill Vegetable Trading Area located in KM 5, La Trinidad, Benguet. The potatoes were again stocked for the whole night since the business transactions start again the following day.

The farmer tried to dispose of the potatoes, however, no buyers were willing to buy it because the goods have already developed visible signs of rotting or pagkalusaw. The goods were not bought that day so the farmer proceeded to a relative in Km. 21 Ambassador for a stop-by and eventually, he dumped the potatoes nearby particularly along the Labey-Lacamen Road in Ambassador at around 5 PM.

The result of the investigation showed that transport of the potatoes was delayed resulting in rotting and was not bought by the buyers who will still need to transport it to farther places such as Metro Manila.

Regional Technical Director for Operations Dir. Danilo P. Daguio encouraged the farmers to bring their produce to the market as soon as harvested especially with the continuous rains being felt in the Cordilleras.

He added that at present, the Benguet Agri-Pinoy Trading center (BAPTC) is now buying vegetables that were not sold at the end of the trading day through the fund capital provided by the DA for such purpose. These sold vegetables are being brought to other regions particularly the National Capital Region where they have set buyers already.

“We have different programs in the Department with regards to marketing. We have the KADIWA Program to assist them link with buyers or we can also provide transportation to transport their products for free and deliver it at designated dropping points,” Dir. Daguio added.

He further noted that the local government units are also there as immediate partners to assist and or provide necessary assistance to the agri-fishery sectors.

Meanwhile, posting mislabeled or misinformed posts on social media is highly discouraged to prevent the further spread of fake news.//(DA)