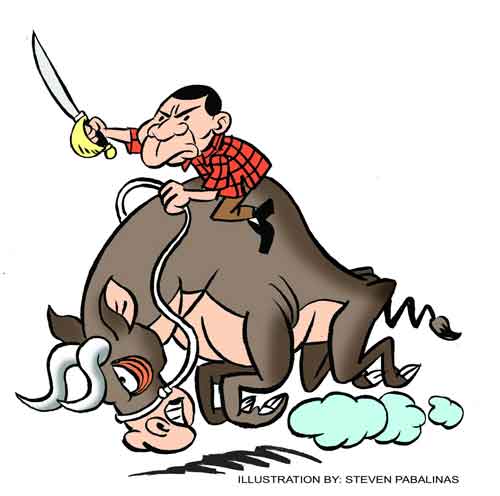 After the ignominious retreat of the water concessionaires, throwing away P10 billion that they won in the Singapore arbitration, President Rodrigo Roa Duterte, the Deegong, Du30 or PRRD, drew blood. There is nothing that arouses the killing instinct of a predator than the taste of first blood. Ayala and Pangilinan are now the prey. And having watched them scamper with their tails between their legs, he will go for the kill. Not literally, but an unequivocal warning that he wants those contracts “renegotiated” on his terms under pain of their losing outright the lucrative contracts or the prospect of a prison term — as if these oligarchs have no choice.
But they have a choice, always! The decades spent accumulating billions of pesos under different regimes and difficult political climates have taught them special survival skills. And they know how to apply these competences to deadly effect. The President knows this, the rest of the oligarchy knows this, the politicians in the pockets of these oligarchs dependent on their largesse know this; only the Duterte diehard supporters (DDS) and the avid fist-bumpers are blind to this. They indulge in the vicarious thrill of the President’s dominant position over the oligarchy, egging him to finish them off. But the Deegong understands very well that a threat can best be effective only if it remains one.
The water concessionaires may notch this one up in PRRD’s win column — for now. But time is on their side, not the President’s, and more importantly, the systemic anomalies of governance that produced the oligarchic class in the first place, will kick in sometime under the guise of the rule of law, protected by a flawed Constitution. Or they may just call DU30’s bluff, with both sides indulging in a zero-sum game. No winners, but we the people are the losers. And government may be compelled to once again take over the water distribution. And we are back to the pre-1997 scenario. No water! Expensive, if you have a trickle coming out of the faucet.

Impending death of a flawed firm
And now the Deegong in his lust for the kill is going for the Lopez-owned ABS-CBN television network. This one is different. The family’s high-profile public role through the decades, lording it over the political environment, making and breaking politicians, has produced enemies. And their ties to Benigno “Pnoy” Aquino 3rd’s administration and his despised cohorts make the DDS hordes salivate. In this script, the Lopez family has conveniently painted itself the “kontrabida.” It has become vulnerable, far from the old days of the formidable founders Don Eñing and Don Nanding and the respected but feared Geny Lopez Jr. — now financially impaired with its allies in Congress in suspended animation. Much as these elected officials have long suckled on the corrupted breasts of the Lopezes, they are thoroughly intimidated by the Deegong’s paralyzing congressional processes to calendar and discuss the extension of the franchise that will be terminated in two months. This simply reflects the moral castration of these two legislative houses and the extent of the President’s hold over this branch of government that was meant as the third pillar of the revered “check and balance” principle towards a working democracy.

War vs oligarchy or a squeeze play
But where is the President going on this one? He is on a roll, but he needs to lay a definite pathway for us to see our way clear through, if he needs our support, the backing of the countless legitimate businessmen and the elite “with conscience” and the greater majority of the masses. This is imperative, if truly this is a real war against the oligarchy, not a “moro-moro.” We can’t be hostage to a fight between colossal egos only to find out in the end that a new face of the oligarchy is being shaped. We have had precedents on this: when Ferdinand Marcos eliminated the old order but replaced them with a new — his own cronies, who in turn were replaced and co-opted by the Aquino-Cojuangco regime. Because of the basic defects in our system of governance, every regime becomes a revolving door. Is the current fight of DU30 against the oligarchy a legitimate one or is this a “squeeze play” analogous to the Roberto Ongpin episode? To recall, this Marcos crony has survived Cory and flourished during the Fidel Ramos, Gloria Macapagal Arroyo and PNoy regimes. Singling out Ongpin from among the many oligarchs and even the bigger ones is a puzzle. As part of the Marcos cabal, he was already tainted. Yet from the very start of his regime, DU30 was fixated — in the Deegong’s words “…Roberto Ongpin, an oligarch must be destroyed.” Was the PhilWeb Gaming Corp. and this particular oligarch part of some mysterious “quid pro quo”? His flagship almost collapsed at the stock market when the Deegong started his tirades. With valuation clearly on a free-fall, it was picked up from the bottom for a pittance — at more than 50 to 80 percent discount, by a Marcos in-law Greggy Araneta. And a little more than a year after the Philippine Amusement and Gaming Corp. (Pagcor) revoked PhilWeb’s gaming privileges, Pagcor issues a “provisional license’ to the now Araneta-owned PhilWeb. Currently the business is thriving. Could this be a template for the next round of skirmishes with the disfavored oligarchs for the favored ones? One wonders! But now Malacañang is silent on this episode and Ongpin’s other businesses continue to thrive: his Alphaland Group of Companies are making money all over the place.

What is the Deegong’s endgame?
All these theaters will have a deadly long-term effect on the economic health of the country. Our excellent economic and finance managers have been everywhere slicing the Deegong’s perorations into palatable soundbites and witticisms to mitigate the damage. Socioeconomic Planning Secretary Ernesto Pernia declared the water dispute as simply “an isolated incident.” I can surmise Finance Secretary Carlos Dominguez squirming awkwardly explaining these naïve presidential statements against foreign investors. “…I don’t care if the foreign investors leave…be my guest,” PRRD declared.
These confusing statements and mixed signals coming from the President are already getting our local investors biting their fingernails. These will have terrible impact on the much-needed foreign direct investments (FDI). Rumblings are beginning to be heard regarding government transgressions against the “sanctity of contracts and inviolability of agreements” and may precipitate an exodus of foreign capital and moneys to other countries in the region. According to the Central Bank’s recent figures, “…FDI had declined for seven straight months compared to the year-earlier period…”
Admittedly, we have more than decent growth figures under DU30’s tutelage, thanks in part to the low-profile economic team that has so far managed to pull the brakes on the PRRD’s populist impulses. But these declarations of war against the oligarchy and corruption, building blocks to his legacy, will all come to naught, a collapsing structure, if he can’t convince the people that he holds the high ground against the Lopezes, Ayalas, Lucio Tans, Ongpins and this avatar of the Indonesian tycoon Anthoni Salim; and that these are not mere rhetoric and opening gambits to the creation of a new order — his own favored oligarchy.