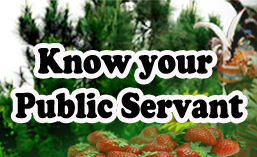 He has shown exemplary dedication and commitment to the cause of the Department in bringing fruits of science and technology to the people he serves. He has not been enticed to leave the country for the comfort of greener pastures even when he was offered opportunities abroad. He has always promoted teamwork and respect to his colleagues and has maintained cohesion of all his staff at DOST and has attained regional objectives effectively in the implementation of their programs.

Dr. Sicat rose from the ranks. He started his career as a volunteer tutor in 1980. He became the Provincial S&T Director of Nueva Ecija and was later promoted as an ARD for the technical operations of DOST Region 3 in 2003. In 1993, he was an accomplished executive with the DOST after working for 19 years with the department. In July 2012, he assured his staff that he does not micro manage. Instead, he has committed to complement his staff in order for them to achieve the set targets of the regional office. He assured that DOST-CAR programs and projects will be for the citizens, collaborative, innovative, and transparency centered.

With his impressive educational qualifications and accomplishments, Dr.Sicat has  published numerous papers for prestigious publications such as the Journal of Japanese Society of Agricultural Machinery. He was recognized as an outstanding CLSU Alumni Achiever in 2010. In 2009, he was awarded the Natatanging Anak ng Nueva Ecija (S&K Category). In 2006, he was awarded PSAE’s outstanding agricultural engineer  under the category in S&K management category.

Dr. Sicat’s appointment as the Regional Director of DOST-CAR was welcomed by both the management and its staff and that everyone is willing to work hand and hand with him to bring science and technology closer to the people of the Cordilleras.

Between November and December 2012, newly stalled Regional Director, Dr. Sicat conducted an Orientation Seminar on Development Project Identification and Project Proposal Writeshop in the six provinces of CAR with the main objective to technically equip identified municipal science and technology coordinators (MPDO) from all municipalities in CAR in the effective project identification, proposal, implementation, monitoring, and evaluation. Here, he further encouraged the municipal S&T coordinators to continuously submit proposals that may be covered under the DOST Small Enterprise Technology Upgrading Program (SETUP). He also ensured the effective collaboration among LGUs, LGAs and other stakeholders in the development, planning, and implememntation of projects of the department. This is in line with DOST-CAR’s recognition that LGUs play a major role in identifying appropriate development projects needed by their constituents at the grassroots level. With the municipal S&T coordinators in place, the agency is assured that actual projects identified and implemented come from the people- the beneficiaries themselves.

For CY  2012, DOST-CAR has targeted 33 projects and accomplished 54 projects region wide. Technology trainings for SETUP Core Funded Projects has a total of 36 and 49 for Non-Core funded projects totaling to 85 technology trainings that have been facilitated and implemented in the various provinces of CAR that benefitted 2,085 participants; Technology clinics and Investors with 14 that were conducted that were participated by 100 firms; RDI patended technology was commercialized in CAR; packaging and labeling of MSMEs with 47 label designs were provided to 34 firms; assisted 25 manufacturing firms and 66 agricultural firms under the Manufacturing and Productivity Extension (MPEX) and Consultancy for Agricultural Productivity Enhancement (CAPE) programs; 10,671 testing services were rendered to 1,400 customers and 478 firms that generated an income of P 2,051,000 surpassing the 9,000 testing services that were previously conducted; three ARGs installation in Apayao, Ifugao, and Baguio City; 303 DOST scolars were monitored; provided OL-trap kits to 11, 793 classrooms identified by DEPED-CAR; constructed Innovation and Provincial S&T Centers in Abra, Apaayo, Ifugao, and Kalinga;  suppotrted the R&D Consortia in the region namely HARRDEC, CIERDEC, and CRHRDC as well as the Aerospace Industry through the clustering of the regional enterprises in CAR for Agri-Industrial Machinery and Parts manufacturing projects; and initiated STEAM program which is designed to technically equip identified municipal science and technology coordinators from all municipalities in CAR.

For CY 2013, a total of 62 projects were implemented with 53  community-based projects and nine projects on support programs for the advancement of science, technology, an innovation; support to the industry was provided through the Regional Standards and Testing Laboratory (RSTL) and Regional Metrology Laboratory (RML); iniated the environment and climate change in support to the hydromet project of Project Noah; CBP projects were implemented to reduce poverty and empowerment of the poor and the vulnerable; and spearheaded the roll-out complementary food production in the regions with the goal of reducing malnutrition rate in children.

The DOST-CAR is the key office of the department in charge of technology transfer and commercialization in the Cordillera Administrative Region. This mandate is fully supported by EO No. 43, series 2011 entitled “Pursuing our Social Contract with the Filipino People Through Re-organization of the Cabinet Clusters”, wherein several key result areas were identified to be provided by the respective government agencies in order for the new administration to achieve its vision particularly in an organized and widely-shared rapid expansion of our economy through a government dedicated to honing and mobilizing our peoples’ skills and energies as well as responsible harnessing of our natural resources.  DOST-CAR continues to pursue its mandate of implementing science and technology laws, rules, regulations, policies, plans, and projects by providing effective and efficient S&T services to the people in the area and coordinating them with other government agencies, local government units and NGOs in the region on S&T matters. Article was redirected from Ms. Sheila Marie Singa-Claver ‘s reports and news gazette of the DOST. by: Ezequiel D.Banas-e