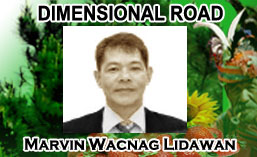 “The goal of education is the advancement of knowledge and the dissemination of truth.”
John F. Kennedy

Educational revolutions are emblems of constantly –flowing wisdom for every member of the populace in the Cordilleran region. With the support of the community and educational institution officials, Congress, Senate President Juan Ponce Enrile and Speaker of the House of Representative Feliciano Belmonte Jr.; the educational institution has now reached the highest stage through the approval of His Excellency, President Benigno Aquino Jr.The approval of this deed is one of the dazzling breakthroughs in the academe worth- disseminating when Republic Act 10583 has been sanctioned. Itis a mandate that gave birth to another Cordillera Administrative Region’s (CAR) state university onMay 24, 20013 which converted the Mountain Province Polytechnic College (MPPC) in the Municipality of Bontoc, Mountain Province into a state university known today as the Mountain Province State Universitywith campuses in the municipalities of Tadian,Bauko,Paracelis and Barlig.

Unknown to other populace of the region, the birth of a new state university is another defining truth which is an influential factor that critically outlines the transcending face of the Cordillera region in pursuit for academic and technicalexcellence. It further maneuvers its usual reputation as a region in the country identified with high rate of literacy since its people learned the value of instruction acquired due to every learner’s perseverance despite travelling to cities just to attend their education. It is indeed, away of enduring sacrifices inquests of education’s relevancewhen higher educationalinstitutions did not exist in the locality. The presence of higher educationinstitutions nowadayspushes thechances of theunprivileged butdeserving to take part of the educative processes to become professionally functional citizens of the country. Having a university in the heart ofthe regionproduces numerousadvantages to its residents and to other neighboringpublic. Let usweigh and consider some plausible points which form sturdy components transforming this academia as an educational abode that determines andmolds thefuture of every cordilleran youth.

This higher education institution in order toserve theinterests of its willing populace will soon raise its academic standards through university accreditations to escalate its level for the emergence of additional relevant courses for varied specializations pertinent to thelocality, to the country and outside for global competitiveness. It also paves the way for the recruitment of top caliber faculty and personnel that are at par with the university’s formulatedstandards for the accomplishments of its visions, missions and objectives. It will also broadenitsaffiliations with other educational organizations here andabroad forsynergetic learning where curricula adaptation and implementation take place. Expect to expandits institutes of disciplines toall its branches for others’ proximity to avail of the course offerings aligned with their interests. Aside fromits baccalaureate courses, graduate studies of varied specialization will be offered to cater to professionals’ continuingeducation. The possibility of hosting future national and international academic and technical conferences is conceivable. When a university firmly exercises its policy and standards, quality education will be acquired. With the visionsassembled asone, it will continuously promote modern outlook of liberal education to absolutely fascinate more youths from the region, from any part of the country or from othernations to get indulge in order to embrace the wonderful gifts of learning.The community can possibly open local tourism to those who come from other neighboringplaces. Itcan provide measures for the operationsof more business establishments in the vicinity where taxes and revenues contribute to the municipalities’ funds whereby projects to benefit its people will materialize.Other than that, creation of possible local employment to commendableapplicants is most likely to occur and with the help of all learning institutions in the area, it will continuously encourage and influence community’s transformation through continued sanitation and green environment-consciousness of which will attract visitors from outside regions.

The opening of the university benefits cordilleran students on equal education rights toadvance their academic exposures and engagement totheir chosen specializations. It toobuilds better perspectives for the residents to local, national and international job markets. It is a fact that state university graduates who display knowledge and skills or excelin their studies are prioritized by educational institution employers here and abroad who are aware of state university standards that they themselves,employ in the educational institutions they lead and or operate.

Republic Act 10583 opens itsunselfish doors to national and international opportunities throughstudents’ earnedknowledge and skills out of the courses successfully availed. The likes of forestry, agricultural courses, health and occupationalsafety,public governance,teacher education, engineering,mass communication, business management, tourism,development communication among other courses create desirable jobsoverseas. Through the continuous escalation ofliteracy rate in the cordilleras, it will permanently galvanize the image that Cordilleran can evidentlyperform at par with other college and university graduates in the Philippines and from other countries. Depending on the initiatives of theuniversity administrators in catering to the needs of higher education learners, we expect continuous breakthroughs in few years’ time.

To continue further, parentswill beeased from financial burdens insending their children in thecity due to the absence of courses in the former college located in the municipality especially if they send more than two college students from the family, through its low-cost tuition fee. To add, close monitoring of children’s academic performance by parents would be transparently possible due to its proximity to the community.

This republic act isa legacy whichthe Aquinoregime can offer under the transitory history of Cordilleran education in the Philippines. We try to figure-out the contents of some remarkable sections that contain the provisions of this mandate to be accomplished.Section 1statesthe legalconversion ofthe stateuniversity specifyingits maincampus in the municipality of Bontoc and itsexternal campuses in Tadian ,Bauko,Paracelis andBarlig. Section24 declares the university’s accreditation in the acquisition of levelIII or even higher status underthe Commission on Higher Education (CHED) which yields the approval of more courses in the next few years.Section 2 emphasizes on the general mandate for the university’s advanced education, highertechnological, professionalinstruction in forestry and agriculture, teacher education , engineering and technology ,arts, humanities, science and other relevant fields of study. Section 3 stipulates the university’s academic freedom and institutional autonomy as a university pursuant to paragraph 2Section 5 of article XIV of the country’s constitution. Section 4 states curricular offerings that the university shall offer graduate school and undergraduateschool studiesin the fieldsof forestry and agriculture, teacher education , engineering and technology,arts and humanities. Section 15 establishes the recruitmentof qualified faculty toserve the university withoutdiscrimination on basis of beliefs, genderpreference, cultural and community affiliation or ethnic origin and religious opinion or affiliationprovided that no member ofthe faculty shall teach for or against any particular church or religious sector. Section16 expressesscholarship program and admission for the provision of scholarship program and other programs in assisting the poor but deserving students who qualify for admission in the university. It further states,that nostudents shall be denied admission in the university due to sexreligion, cultural or community affiliation or ethnic origin.
With this educational development recently bestowed to the Cordilleran region, expect the continued fruitions of professionally functional graduates that will reinforcethe factthat Cordilleranspirits will never be enthralled by ignorance.marvinwacnaglidawan@gmail.com.