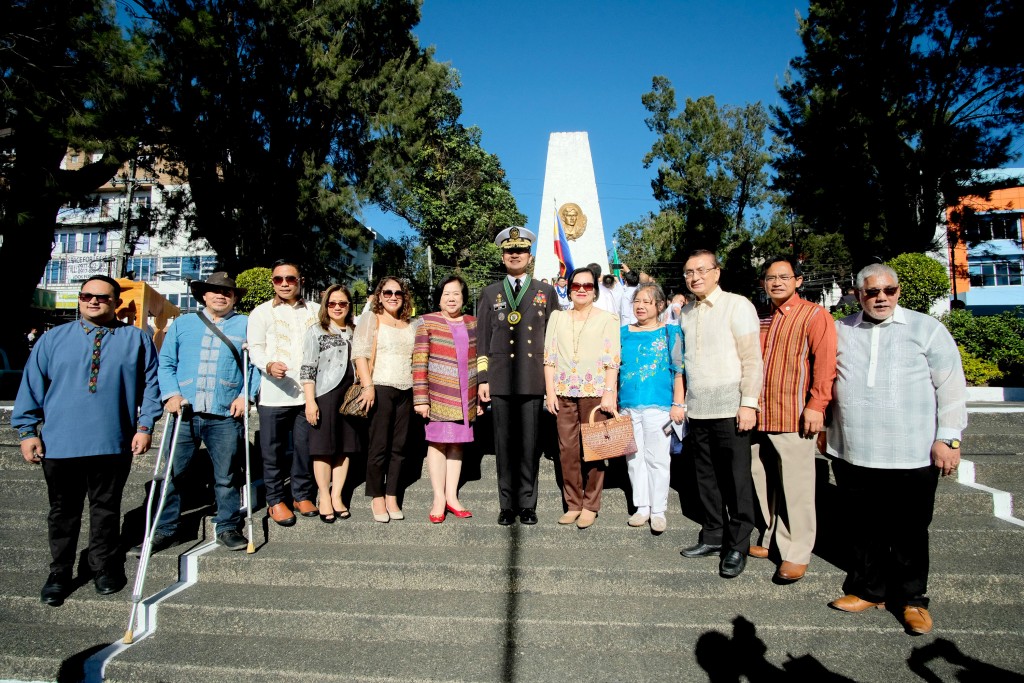 Baguio City Officials together with the PMA Superintendent held a short program to commerate the life and works of Jose Rizal every December 30 at Rizal Park./Photo by Neil Clark Ongchangco

BAGUIO CITY – Acting City Mayor Faustino A. Olowan underscored that for over a decade, the government was not remiss in celebrating the life and recognizing the heroism of the country’s national hero, Dr. Jose P. Rizal.
In recognition of Rizal’s heroism, Olowan disclosed the government has performed various actions that allowed the nationwide commemoration of Rizal’s martyrdom every December 30.
He recalled that on December 20, 1898 or 2 years after Rizal’s execution, the first Philippine President, Gen. Emilio Aguinaldo, issued a decree declaring the celebration of the death anniversary of Rizal on December 30 and as a National Day of Mourning.
He also made a directive that all national flags shall be hoisted at half-mask from 12 noon of every December 29 and all government offices shall be closed the whole day of December 30 as a sign of mourning.
In 1901, Rizal acquired the recognition as ‘Philippine National Hero’ under the first American Governor William Howard Taft and on June 11, 1901, the Taft Commission issued Act No. 137 renaming the district of Morong as Rizal Province.
On February 1, 1902, Act No. 345 was enacted by the Philippine Commission setting December 30 of each year as Rizal Day and making it one of the ten official holidays of the Philippines.
Further, on September 28, 1901, the Taft Commission enacted Act No. 243 granting the right to use a public land at the Luneta in Manila where the statue of Dr. Jose Rizal was erected and remains in the said area to date.
Olowan pointed out the established monuments of Dr. Rizal in different locations in the country are concrete memorials of the legacy he left behind and worthy of emulation, especially among the country’s youth.
According to him, Rizal Day was so important that former President Elpidio Quirino approved on June 9, 1948 Republic Act (RA) No. 229 that prohibited cockfighting, horse racing and jai-alai every December 30.
On June 12, 1956, RA 1425, commonly known as the Rizal Act, was issued and sponsored by Claro M. Recto that required all schools, colleges and universities to include in their curricula the life, works and writings of Rizal, specifically his novels Noli Me Tangere and El Filibusterismo to educate the students on the concept of nationalism.
He asserted Rizal numerous acts inspired the movement that resulted to the attainment of the country’s freedom from colonizers which the government recognizes through the various legislations that recognize the national hero’s heroism and martyrdom.
Olowan stated Rizal is a concrete example of being a true Filipino and that he remains the supreme hero of the country because of the quality of his sacrifice, his absolute dedication to the interest of the Filipinos and his achievement in many fields of endeavor while he was alive.
Baguio City joined the nation in the commemoration of the 123rd martyrdom of Dr. Jose Rizal with simple but meaningful rites held at the Rizal Park last December 30, 2019./Dexter A. See