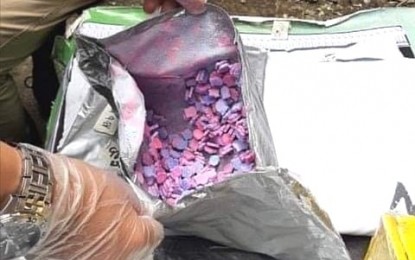 BAGUIO CITY – Government anti-illegal drugs enforcers seized 1,783 tablets of suspected ecstasy in an inbound parcel from Germany delivered to a consignee here at past noon Thursday.

Gil Cesario Castro, Cordillera Administrative Region (CAR) regional director of the Philippine Drug Enforcement Agency (PDEA), said the parcel was discovered by the personnel of the anti-illegal drugs task group at the Ninoy Aquino International Airport (NAIA) when a canine dog sat on it during a random “sweeping” operation.

The task group is composed of personnel from PDEA, Bureau of Customs (BOC), and the National Bureau of Investigation (NBI).

The task group organized the operation for the delivery of the parcel shipped by a certain Fostina Obobo of Romerstrasse 40 41462 Neuss, Germany, and consigned to Joyce Ann San Antonio of Rm. 101 Bristle Ridge Residences, Pacdal Road, Baguio City.

Instead of the consignee, Castro said a certain Elisa Agguirre Millare, 52, of 26 AB Sitio Mabilog, New Era, Quezon City received the parcel from government agents who posed as delivery men that brought the parcel to the address in this city around 12:30 p.m.

The parcel came with a bedsheet, pair of shoes, and improvised pouches made of duct tape containing several colored tablets. The party drugs are valued at PHP3,031,100.

Castro said the parcel is a test delivery for the possibility of making the city a hub for the party drugs and will only bring to Metro Manila when needed.

“Walang parties na nangyayari dito sa Baguio kaya nakakapagtaka na dito dinala (it surprises us that they brought it here when there are no events or parties happening here),” Castro said.