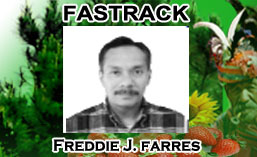 Facebook is definitelly one of the great websites that help a lot of us stay in touch with friends, relatives, classmates etc., although the uses and benefits of Facebook as a social networking website has seemd to have expanded and evolved beyond the wildest dreams of its creators. However, I seriously doubt if one of the intents and purposes of the social networking site is for use of selective, relentless, one-way political black propaganda purposes. In fact, as explained to me, there are mechanisms in place within Facebook to address those persons who use it in an abusive manner, and we are looking into this and we hope that whatever sanctions FB may take will not just be a mere 30-day suspension but something more firm. We will let you know developments on this in succeeding collumn.

Let us take for example the usage of Ms. Grace Bandoy, based on what I have seen at her website on the part of her “facebook accomplishments,” and based also on a CD sent to our office by a certain Remando Martinez, it appears that Ms. Bandoy is engaged in selective, one-way, non-stop bashing of the Mayor and the Congressman. If I were to interpret this non-stop selective bashing, it would appear that she has an axe to grind against these officials. Why so? What could possibly be her reason(s) for doing so? To make matters worse, I was informed and as I understand, there is documentation on this, when another party posts a contradictory comment or even merely posts a question at her FB page which is not to her liking, she immediately will erase and block that person from being able to ever post in her FB page. My God, this is crazy! Can you imagine yourself having to be up on your feet and the time one has to spend in monitoring his/her FB page?!? Those involved in tri-media know that one is accountable for whatever one writes or says, and therefore one could be liable for a charge of libel, among others. However, you may say that we already have an anti-cybercrime act/law and that being charged and/or convicted of libel committed through the Internet is now possible. Well, libel via FB, this I gotta see. Let’s see if you can get Mark Zuckerberg or any of his staff to testify for or against you! One thing I always tell others, and which I practice and adhere to, is the saying “I may not agree with what you have to say, but I will defend your right to say/write it.” Unfortunately, what Ms. Bandoy appears to be doing in her FB is nothing but sheer, relentless non-stop one way black propaganda without allowing her subjects and/or friends/supporters of her subjects the benefit of free and independent comments. In fact, if Ms. Bandoy truly believes in all the stuff she is posting, she should have no fear with counter comments and/or rebuttals, and she should even encourage the posting of such non-conforming comments/reactions! I am also starting to wonder if Ms. Bandoy and her usual band of motley FB supporters who happen to be quick to click the “like” button or dish out incindiary or discriminatory comments are living in a world of DELUSSION (let us spare each other the usual psych interperetation, as just recently, studies have shown that those fond of engaging in selfies have a psych problem), or are they simply there to like or comment for the heck of it? Thank God, at least I can safely say that I spend my time in a more productive manner.
####

Let us look at possible motives of Ms. Bandoy in her relentless non-stop bashing. It is a common knowledge that she has been very supportive of the previous candidacy of Atty. Jose “Jomol” Molintas. I don’t buy the idea (as suggested by some) that Ms. Bandoy is simply sour graping from the numerous election losses of her benefactor. While she had informed me in the past that she has a debt of gratitude towards Atty. Jomol as he had represented her brother (pro bono) in some kind of a custody case or visitation rights case involving the daughter of her brother, her niece (her unica jiha pamangkin), hence the debt of gratitude. While I can understand utang na loob as they say “gratitude has the highest command,” however, the relentless bashing by Ms. Bandoy appear to be misplaced and speak of actions other than utang na loob. I also do not buy the suggestion of some that there is a more personal angle to it, what do they mean by personal? Although whether there is a more personal dimension to it or not, I would rather not comment until such time that there is reasonable showing of such, other than wild soap opera type speculation! There is also this idea floated that she is being maintained by the loosing former Congressman Bernardo Vergara through his PR man Ferdie Balanag. This could be possible, but it just doesn’t seem to fit. As I recall, Ms. Bandoy has also been, for a time, very critical of the former Congressman. However, I do wonder as to how come she stoped being critical. Is it simply because the former congressman lost and is now a “former congressman” so whatever critical postings she had been dishing out are now to be considered moot?
####

At any rate, I have now said my part in relation to the FB escapades of Ms. Bandoy and also with her alleged website and whatever are the reasons for Ms. Bandoy in engaging in such, I hope she will realize that Facebook may not be the place to do it. However, should she insist on continuing with her Facebook selective bashing in a no-holds-barred (one-way) expression, then she should woman-up (the opposite of man-up) and do her bashing in a manner where her subjects or friends/supporters of her subjects will be given the benefit of an open (uncensorred and un-edited) reply.
####

As usual Grace, feel free to send over your comments and/or reactions to this column, and be rest assured of its printing, en toto.