LA TRINIDAD, Benguet— Officials here confirmed on Wednesday that the African swine fever (ASF) virus has reached the province and will no longer allow the entry of all live pigs to contain the disease.
Dr. Meriam Tiongan, provincial veterinary office chief, said they are finalizing the executive order of Governor Melchor Diclas declaring a total ban on the entry of live pigs.
Benguet province has jurisdiction of all the national highways leading to Baguio City and capital town La Trinidad- Naguillian Road from Bauang town in La Union; San Pascual Road from Tubao town, La Union; Marcos Highway from Pugo, La Union; Kennon Road from Rosario La Union; Benguet-Vizcaya Road via Bokod, Benguet from Kayapa Nueva Vizcaya; the Benguet-Ifugao Road via Buguias Benguet; Halsema Highway that connects to Mountain Province leading to Ifugao and Region 2 (Cagayan Valley); the road to Sudipen La Union via Bakun town; and the Benguet- Cervantes Road that connects to Ilocos Sur.
Tiongan said they received confirmation on Wednesday noon that the samples they sent for laboratory testing were tested positive for ASF.
The samples were taken from piggeries in Camp 1, Tuba town and in Beckel, La Trinidad town.
Once issued, the order will only allow imported frozen meat which has been certified to have come from ASF-free countries.
Tiongan said in Camp 1, there are 177 “de-populated” (culled) pigs in a commercial piggery after a pig was tested positive for the virus.
She said the pigs include the Vietnamese variety pigs which are likened to native boars and the local breed.
Tiongan said the owner himself reported of the incident and has opted to have all his animals immediately culled to prevent the possible spread of the disease.
“We did the de-pop on Tuesday night as requested by the owner. He opted to have all his animals killed and buried as he was afraid that people will blame him for bringing ASF,” Tiongan said.
She said they suspect the contamination came from the swill feed that the owner gets from a restaurant in Baguio as the cause of the ASF.
Meanwhile, in Beckel, La Trinidad, a police officer bought PHP200,000 worth of piglets online and picked them up from Pangasinan.
He then transported the 52 heads of swine in concealed ordinary pickup trucks to avoid being discovered at quarantine checkpoints, allowing him to bring in the animals despite lack of clearances and permits.
“We went to the place on Monday for a de-pop but one of the 11 had again died and the others so weak and showing signs of ASF so the owner asked to kill everything,” Tiongan said.
She said they have been very aggressive telling the public to abide by their guidelines to prevent the entry of the ASF virus.
“We have been hoping it does not reach us, but now there is nothing more to do but to implement the rules to avoid further contamination,” she said.
She said the “1-7-10 protocol” will now be imposed.
Under the protocol, quarantine checkpoints are set up in areas within a 1-kilometer radius of suspected farms—monitoring the movement of live pigs, pork, and pork products.
Within a 7-kilometer radius, authorities are conducting surveillance and limiting animal movement.
Farm owners within the 10-kilometer radius are mandated to report any disease to the Department of Agriculture.
Many residents are engaged in swine production as a backyard or commercial producers in Tuba town./Liza Agoot ( 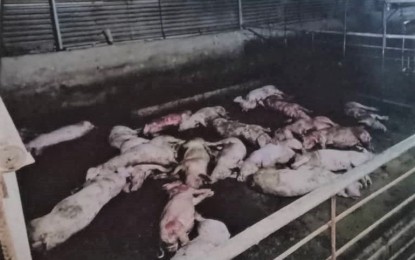 DE-POPULATION. A commercial piggery in Tuba, Benguet province was found to have pigs infected with African swine fever (ASF). The owner opted for the culling of all his 175 pigs to avoid the spread of the virus. (Photo screenshot from the report of the provincial veterinary office)