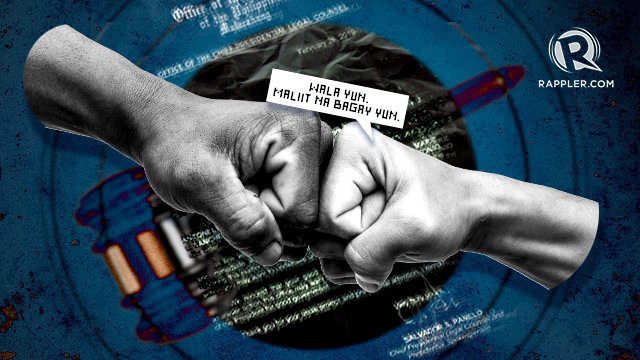 Was it right or wrong for Presidential Spokesperson Salvador Panelo to forward the written plea for clemency of convicted rapist-murderer Antonio Sanchez to the Board of Pardons and Parole (BPP)? Was Senator Bato dela Rosa right or wrong in claiming that it’s acceptable for policemen to accept gifts?
These recent controversies have sparked public debates about what is proper and improper behavior in and outside of government.
In this piece, I argue that what is proper and improper behavior in government and in society depends to a large extent on our understanding of what should be considered “public,” “private” and when the public and the private should be linked or de-linked.
I further argue that many of the problems that we face in Philippine society today have to do with our fragmented – and oftentimes convoluted – understanding of these concepts.

Panelo has been insisting that he did nothing wrong when he forwarded the written plea of the family of the convicted Sanchez to the BPP because this was just standard practice. Panelo claimed that Sanchez’s letter was just one of the many letters that his office often forwards to other government agencies. No less than President Rodrigo Duterte supported this claim, saying that Panelo did the right thing to send the letter to “the proper entity.”
The elephant in the room is the fact that Secretary Panelo is the President’s spokesperson and Chief Legal Counsel. Spokespersons are supposed to work with the political communications team, not the BPP.
What Panelo did then was a favor, not a mandated task. That he was a former lawyer aiding a former client beyond his mandate clearly puts himself in a conflict-of-interest situation. That he apparently forwarded the letter of just one convict and not all possible convicts already smacks of favoritism or of doing someone a favor. But nobody seems to be pointing this out. For many Filipinos, it is a trivial thing: “Wala ‘yun. Maliit na bagay ‘yun.”
The Panelo incident is not the only time that we see the blurring of the line between “mandates” and “favors.”
When Senator Bong Go insists that it is alright for him to continue his stint as the President’s close-in aide even now that he is a senator, he is actually doing the President (and I guess, himself) a favor and not fulfilling any mandate.
When Senator Bato dela Rosa says gifts to policemen are acceptable, he is actually undermining the principle that people need not be grateful to policemen in that way because that’s what taxes are already for: public safety and protection.
The basic difference between a favor and a mandate is that the former can be withheld while the latter must be fulfilled. The idea of gift-giving suggests that only those who can give gifts can be secured. This is the seed upon which corruption often grows.

Right after the 2019 elections, pictures of “empty” public offices vacated by losing candidates immediately started circulating in mainstream and social media. The images of public offices stripped of property because these were supposedly “personal” property illustrate the erroneous concept that people can treat public property as personal belongings.
Obviously, what is public is what is paid for by taxpayers’ money and what is private is what is paid for by private individuals or entities. One can understand if a losing mayor brings home his/her personal effects, but to strip an office of all supplies and all property is clearly a breach of one’s mandate.
The overreach of “the personal/the private” is so deeply embedded in our political culture that we can no longer seem to imagine having alternatives to political dynasties. The very notion of a political dynasty suggests an overreach of “the personal” and thereby the distortion of “the public.” (See map of major political clans after the 2019 elections)
A public office should not be viewed as a family enterprise because viewing it as such undermines the democratic principle of political equality: everyone has a right to vote and to compete for public office. Nobody is deemed entitled to any public office. Nobody is supposed to “own” any public office.
Another example of how convoluted the Filipinos’ sense of the public-private divide is the notion that President Duterte is a father (Tatay Digong). Many would dismiss this as part of “Filipino culture,” a sign of respect for our elders, but this is in reality an aberration from the concept of accountability.
We are not supposed to view our politicians as our fathers because in families, fathers often can do no wrong. In politics, a politician can make a mistake or commit a crime that is unforgivable. To treat our politicians as relatives is regressive, not progressive. No one can be a father to more than 100 million people.

The sacred versus the secular

Another “standard practice” is when senators and congresspersons invoke Catholic teachings to assail public policies that run counter to Catholic Church teachings. When they do this, they are actually going beyond their mandates and, in fact, are abusing them to favor their church.
This is not to say that the Catholic Church may not hold or express views on public policies. Any church has the right to express its views in public and to participate in public discourse.
Public officials, however, should not be guided primarily by their personal religious faiths when crafting public policy, because said policy is supposed to be for everyone. That is what having a secular state entails (as stipulated in the Philippine Constitution). Public officials can of course be informed by their religion, but they cannot impose said religion on policy because policy is meant to be inclusive.
Whenever this kind of secular argument is made, a counter-argument is often given: that the reason the government is corrupt is because it is devoid of (religious) values. This point is unacceptable because it neglects the fact that values already underpin laws and that not one religion has the monopoly of what is right or wrong. Even in a country where majority are Catholics, government’s standpoint should be that not everyone is Catholic and there is nothing wrong with that. The metric for a sound public policy should be what works for everyone.
The blurring of the public and the private and the sacred and the secular has been happening not only in government but even in our social institutions. In our public schools we see teachers praying even if public schools, by virtue of their being public entities, are expected to implement the state policy of the separation of the church and the state.

There are many other facets and notions of the public, the private, and the public-private divide.
The Gretchen Diez case, for example, brings to light the question of inclusivity of public spaces. This case, however, needs a separate articulation because it is embedded in the entire discourse of the personal being political.
There is also that issue of privatization – when public goods are being provided by private corporations and the lines between public service and profit get blurred. The recent water shortage controversy also needs proper articulation. Where public goods are concerned, should citizens really be treated as costumers?
Finally, there is that notion of the public as “everybody,” the notion that the community/nation is important, not just the individual. Filipinos can’t seem to get this right. A glaring piece of evidence is traffic. Motorists always think that only they have the right to the road – not the cyclists or the pedestrians. We just can’t seem to get this: everyone has the right to the road.
Indeed, many notions of the public, the private, and the public-private divide need to be discussed. But first, let’s resolve that Panelo case: that was a favor, not a mandate. – Rappler.com
Carmel V. Abao is an assistant professor of the Department of Political Science of Ateneo de Manila University.